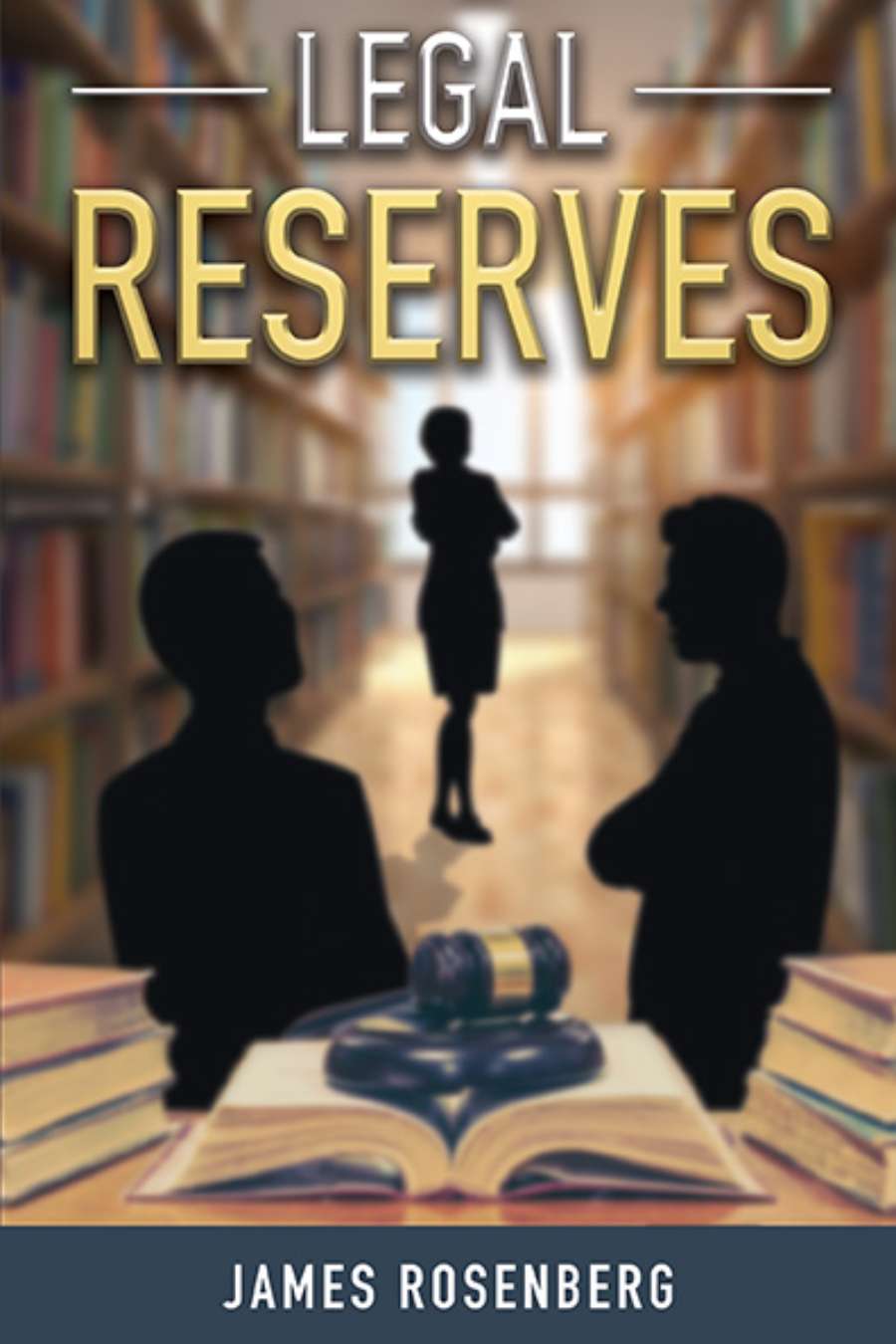 The two lawyers and the judge all have major reasons to worry: Jeri Richards, a newbie judge, is presiding over her first trial concerned she is too inexperienced to handle it. Mike Reigert, the plaintiff’s attorney, must try his biggest case because his client refuses the department store’s huge settlement offers--just to make sure that what they did to her won’t ever happen to anyone else. The company’s attorney, Jack Rogers, is told that he must win this trial or face banishment from his law firm.

If that weren’t enough, the three of them have been best friends since their first day of law school.

Back then, they were the cream of their law school and thought their legal careers would involve nothing but success . . . . Now, they aren’t so sure.

Jeri adored her two friends in law school. They helped her overcome the trauma of almost being raped. After graduating, she prosecuted the scum that preyed on the weak and became the youngest judge in her county.

Mike was planning to work in Geneva stopping international terrorism, but his uncle convinced him to help in his small practice in a sleepy town outside of Pittsburgh. Mike itches for more responsibility and finally comes to represent a woman mercilessly chained to a table until she confessed to a crime.

Jack craves the big money he would make if he became a partner at his huge law firm, and is willing to do anything to make it happen.

Now five years after graduating from law school they are thrown back together on opposite sides of a trial where Mike’s client seeks to regain her life while Jack will not stop to make sure the company prevails.

Jeri watches as the battles between her two buddies escalate until she has to intervene to protect the life of one of her friends.

Bright lights illuminated the fourteen leather chairs surrounding the gleaming mahogany table. A video screen dropped into view with a faint mechanical hum. Once he received the signal from the nattily dressed man seated at the table, Jack Rogers dimmed the lights and as he started the video said, "I hope you are pleased with what you are about to see."

The man did not react, sitting motionless, staring at the images on the screen. The presentation lasted less than five minutes and when it was over the man leaned back in his chair, resting his hands behind his head. "That was tremendous," he said. "It should help our case significantly."

Jack let out a scarcely audible sigh having received the blessing of his mentor. "Ed, do you think they’re going to be pissed when they see this?"

"Does a bear crap in the woods?"

Jack laughed as if this were the first time he had heard his mentor ask that question, his black hair thrown back slightly as his head nodded. "Speaking of the woods, that little scene where we caught them doing it behind the trees was entertaining, wasn't it? Do you think we should send them this video and give them something to think about?"

The man thought for a moment and responded, "No, if they really want to take this case to trial, you can shove the video up your buddy's ass during cross-examination. What we just watched will seal the deal if a jury ever sees it. We'll save it as our little insurance policy.” He looked over at Jack with a wry smile on his face. “You finally seem to have this case under control."

Jack felt his pulse slow for the first time in weeks.

Mike Reigert glared at his clients, his clenched fist pounding the table. "I can't believe what my investigator reported. Can you explain it to me?" The middle-aged couple sitting in the fake leather chairs lifted their eyes from the copies of the seven-page report Mike had given to them at the beginning of their meeting.

The couple stared at Mike without responding. Rubbing his hands through his light-red hair, Mike’s heart rate accelerated and he felt a trickle of sweat under his arms. He looked squarely at the woman dressed in an unflattering pantsuit. "Martha, I thought you spent all day in your bedroom. My investigator has you leaving your house by yourself three times in a week. Doesn't sound like you are so hurt to me."

The beefy man in the ratty sports coat sitting next to Martha put a hand on her arm to indicate he would respond. "Mike, this doesn't seem so bad to me. This means she didn't leave the house four days during that week."

"Mr. Gebbert, you don't get it, do you? Close is not good enough. You have to be perfect. If Martha is injured, then she has to act like she's hurt. Understand? The report has her going to the grocery store and then over to a friend's house. Think about what their lawyer would do with that information if he had it. You testified she couldn't leave the house. That can't be true if she is running all over town. If for some reason she absolutely has to leave home, like if she has to go to her shrink or to come here, you are holding onto her as if she is the most fragile thing on Earth."

Paul Gebbert stood from his chair and looked directly into Mike's eyes. "We understand what you are saying. She will do better. I will make sure you can trust her."

Martha stood and weakly grabbed her attorney's hand to say goodbye. Mike watched his clients leave the conference room and wondered what curveball his case would throw him next.

The peeling paint and stained carpet didn't bother Jeri Richards. She looked at the seal of the Commonwealth of Pennsylvania mounted behind the desk and felt a surge of pride. "Mom, can you believe this is mine?"

The well-attired woman with Jeri shook her head at the dilapidated state of the office. "Oh Jeri, look at this desk," she said as she pulled her hand away from the grime coating the top of the desk. "This is a mess."

"I know, Mom, but this is easy to fix. Judge Wecksel didn't care much about decorating. His bigger problem was he liked to use this office for non-legal acitivites. It's going to be different now." Jeri folded her arms across her chest and stood tall.

Sandy Richards stepped towards her daughter and embraced her. "I'm sorry to focus on the unimportant stuff. I'm so proud of you. I can't believe you are a judge."

Jeri beamed and allowed the hug to linger. The corrugated paper box her mother had put on the leather armchair in front of the desk diverted her attention. "What surprises have you brought for me?"

Sandy pulled back and cleared her throat. "It's some of your dad's stuff. I thought you might want it."

Jeri opened the box and grabbed a picture frame sitting on top. Her eyes immediately welled-up. "He was so handsome, wasn't he?" she said pulling her mom over to look at the picture. "I always thought he looked so strong in his dress whites."

Sandy put her head on Jeri's shoulder. "He was so good looking. At least you got his beautiful dark skin and not my pasty white coloring."

They paused for a moment, staring at the picture before Jeri said, "What else is in the box?"

"Just a few of his things I thought you might like to have. You can do whatever you want with them."

Jeri hesitated, sensing that digging deeper into the box might rip open old wounds. She slowly pulled out her father's police academy graduation certificate, followed by his badge and then some ribbons and other commendations. She gasped when she extracted the last item from the box.

"No way! Mom, how did you get this past security?" Jeri asked as she held up a sleek patrolman's sidearm.

Sandy blushed. "The nice security guard downstairs helped me with the box. I think he just took it to the other side of the scanner without sending it through. I guess I didn't look terribly threatening."

Jeri laughed, but kept her focus on the gun while she felt its weight in her hands.

"He never shot it. Twenty-two years on the squad and he never drew his weapon." her mom said. "Kind of ironic, isn't it? He was killed by that drug dealer, but never unholstered his gun."

Jeri sat into the chair behind the desk as her mother stood motionless on the other side, their gazes fixed on the gleam of the revolver.

I read legal stories approximately 90% or so of the time. So I feel I have a reasonable knowledge of what books are good or not so good.  This book was excellent. I would rate Legal Reserves right in my top 5, if not at the top of my list. I highly recommend this book....

Hard to put the book down from the first page. The book is structured so that it moves back and forth through time, it moves quickly and draws you in. The reader gets a mix of the personal and professional worlds of all three characters. It is a great view into the complexity of legal system and how perspective can change life events....

As a fan of Scott Pratt and Deborah Hawkins, I found this author through kindle recommendations. Glad I did. Great story, wonderful characters and good suspense....