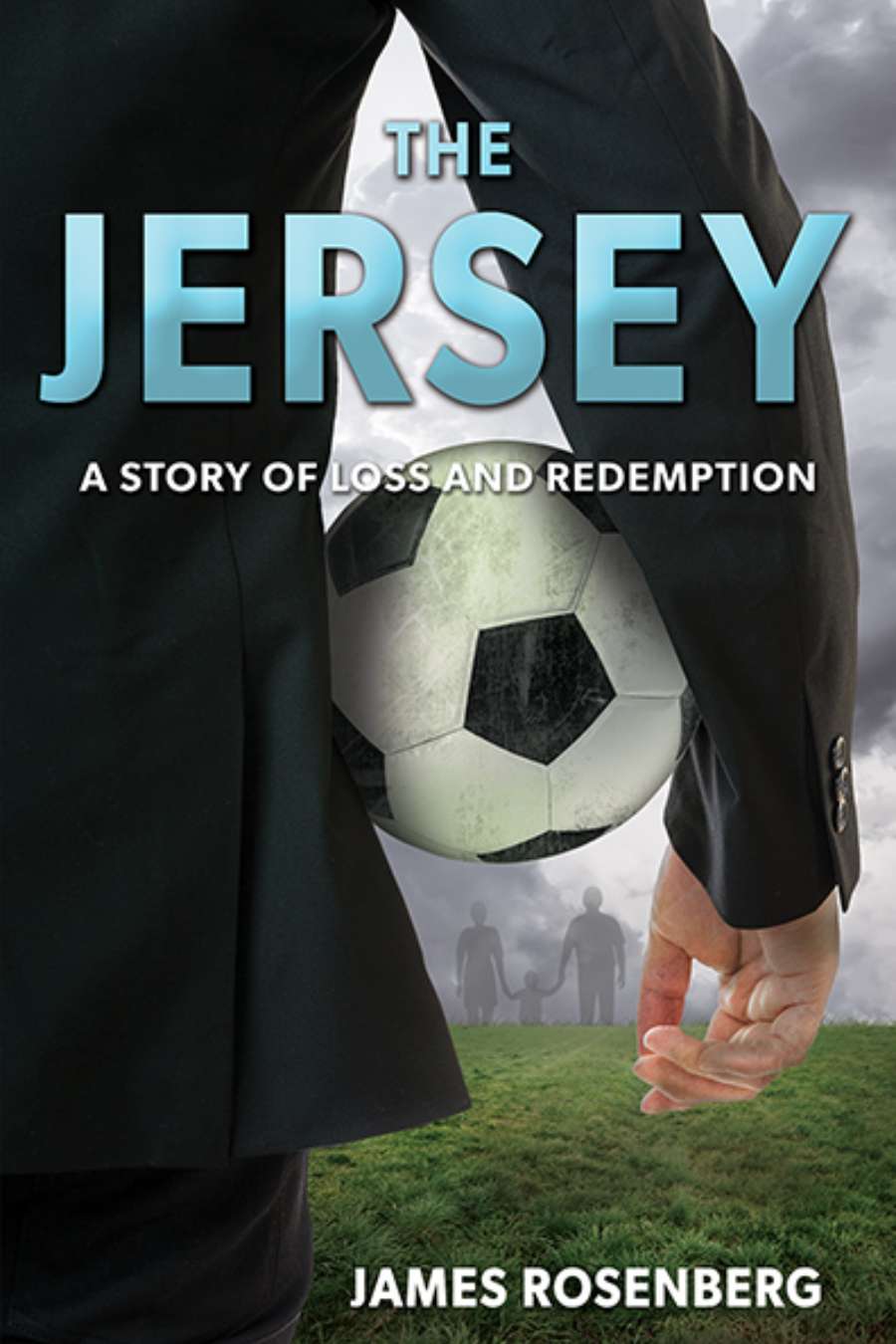 Dan West wonders which is more important to him: Helping his long-time friend win back his business after being accused of stealing money from the company or coaching his eleven-year-old son’s soccer team trying to win an improbable championship.

Money and prestige don’t motivate Dan.  Rather, family, work and coaching soccer are the underpinnings of his life.  He revels in the simple joys like hanging out with his wife Jill, mentoring a young lawyer at his firm and watching the boys connect on three passes before drilling the ball into the back of the net.

Dan always knew to keep it steady—not to get too high or he might get knocked off of his perch.  And he did, until he, and the boys’ soccer team, achieved unimagined success.  Before he can grasp how good he has it, tragedy rips a hole in his family.

James Rosenberg, author of the bestseller Legal Reserves, strikes a new chord in his exploration of what makes a life and how to put it back together after it is shattered.

The Jersey is a beautifully written, profoundly touching, and relatable story of love, loss and the redemptive power of a group of motivated eleven-year-old kids

Charley bounds down the steps to the garage and practically leaps into my little hybrid. He wears his shin guards, soccer socks, and cleats, and carries his water bottle. “Dad, this is going to be a great season.”

“Why do you say that?” I ask as we pull out into our street.

“Because we’re going to be better.”

“So is everyone else.”

He pauses for a moment. I’m not sure where his thoughts will lead us.

“Do you want the team to improve?” I ask.

“Well, how do you get better?”

I laugh—he and I may not exactly have the same expectations for how to get his team to improve, but at least he’s putting a little thought into it.

The ride to the soccer field is short, and Charley is energized and talkative. We talk about school. I find out Arnold cut his hand at recess. We discuss video games. He informs me the new Megazone game comes out soon. We converse about the weather. He tells me once it flooded so badly in Texas, it created a river of cows. I enjoy his excitement for soccer, because he can’t stop giving me tidbits about his life.

A few of his teammates are running around when we arrive. Practice is scheduled to start at noon, yet there are only four players ready five minutes before the starting time. At the anointed hour, seven kids chase each other on the far side of the field.

I yell to them, yet they ignore me. I put my fingers in my mouth and whistle. They still don’t respond.

I run across the grass, yelling it’s time to begin. One of the boys responds, “We’ll be there in a minute.” Five minutes later, they’re still chasing each other.

Mike and Stephen show up as I’m preparing a plan to gather the wayward children. I ask them if they want to start. They respond by asking where everyone else is. I point across the field to the mass of bodies rolling in a pile. The allure of the scrum is too much. They bolt to join in the melee.

I stand fifty feet from the ongoing chaos with my hands on my hips as the boys continue to throw each other to the ground and run around like maniacs. I pull a whistle out of my pocket and raise it to my mouth. The shrill sound catches their attention, and they pause to glance in my direction. Like a pack of jackals eating their prey, they aren’t bothered by anything not in their immediate vicinity. They ignore me and begin jumping on each other anew.

I walk toward them, crossing the white line that marks the edge of the field. I watch in amazement. They have no concern for anything other than what occupies them at that moment. A couple of the kids glimpse at me but pay no mind. They will continue for the next hour unless I do something. I again put the whistle to my mouth and blow it as loud as I can. Finally, I have their attention.

“Not really,” responds Nate, a tall defense man, who is holding Stephen’s ball while Stephen tries to retrieve it.

The boys gather their gear and straggle across the grass. I instruct them to stand on the white line. They gingerly walk to the chalk and begin conversing again.

I want to refocus the group. “Who’s here to practice?”

A couple of hands rise, but most haven’t heard the question as a new round of stealing soccer balls begins. I blow the whistle again.


“Sit on the line!” I demand, pointing to the ground. Desperately trying to salvage some practice time and hoping to demonstrate my authority, I stare at the group. I have their attention, I think, until my hopes are dashed when four of them, including Charley, begin chasing each other on the field. This encourages three others to revert to climbing on top of their neighbor.

“Stay on the line,” I yell at the five kids who remain seated, as I to leave to corral the wayward boys. After another five minutes, the entire group is finally together. I pace in front of them, my anger barely dissipating. “Who’s here to play soccer?” I again ask them.

Everyone yells, “We are!”

“I’m glad to hear it. Let’s talk about what we are going to try to accomplish this year. First....”

A hand in the air interrupts my flow. “Should we call you Dan or Coach?” asks Lance, his high voice almost cracking.

“I think either is fine,” I reply. “I want to see if we can figure out what went wrong last season. From what I saw, we should address a few issues. For example....”

Another hand rises. I nod.

Jacob asks, “When is our first game?”

“In two weeks. I think we should start, so we are ready.”

The inquiries begin without any hands being raised: “What position am I going to play?” “Who’s bringing snack?” Why are you wearing a green T-shirt?”

The boys want to ask questions just to hear their own voices. We might spend all practice playing this game, so I change tactics.

“Stand, please,” I coax the group. They all rise, but soon three of them are kicking other kids’ soccer balls.

I want them to focus, so I instruct, “Put your balls behind you.” The words are barely out of my mouth when I recognize my mistake.

The boys begin to snicker until Stan yells, “He said, ‘Put your balls behind you.’“

“Yeah, I heard that,” Ricardo responds.

“Watch this,” says Sam, as he puts his hands down his pants. “My balls are behind me, now.”

“Hey, Coach, how are we going to play with our balls behind us? It’s not comfortable,” laughs Mike.

The boys all attempt to put their testicles behind them. Each has his hands down his shorts, demonstrating to his neighbor how difficult it would be to play soccer with his balls behind him.

I’ve lost control and make a mental note always to refer to the item they kick as a soccer ball. The boys laugh uncontrollably while rolling on the ground. I pull out the whistle again and blow. They stop. “On the line,” I yell.

They return to their original positions.

“Nobody’s putting up with this crap again.” They stare, finally quiet.

I meet their gaze. “Don’t give me that wounded routine. I will swear at you if you act like babies again. I’m here to teach. I’m not your babysitter. There’s one of me and twelve of you. You will win this battle every time if you want. You’re lucky I told your parents to stay away from the field today. You don’t want to learn today, and if you don’t, I’m won’t coach. We’re done.”

I stop and tap at a ball at my feet. “Next time, if you want to play, show up on Tuesday. If you intend to screw around, don’t come. This isn’t social hour. This is practice. We’re done. Your parents are over by the pavilion. Go tell them you weren’t ready.”

I turn and leave them staring at me. I’m mad but in control of my emotions. Last season they trampled their coach. Not this time. I suspect some parents will call. I rehearse in my mind telling them their kids must be prepared for practice the next time.

Charley runs over to join me as I walk toward the car. “Get the message to the team this is not last year. If you’re here, you will focus on the drills—no more social hour.”

He stares at the ground. He won’t walk next to me, and I’m just as happy to walk alone.

Now my favorite novel! The Jersey is engrossing, delightful and heartbreaking. An experience of true love, the glories of youth sports, tragedy and the universal fight for justice, all in one package. With characters living, breathing and universally human, The Jersey captures the feel, the complexity and the meaning of real life, love and community....

This is an emotional story that continues to build throughout the book. You will witness the great love of one man....

Jim Rosenberg balances an incredible trifecta with this deeply personal story : a dad trying to coach his son's soccer team to the championship - a lawyer trying to bring justice for his close friend - and a heart-wrenching journey toward overcoming terrible grief . . . Yes, I am biased (because I narrated the audiobook). But I also connected directly to the warmth, love, laughter - and yes, many tears - that fill this incredibly HUMAN story. Highly recommended for any deep thinkers and deep feel-ers out there !!!